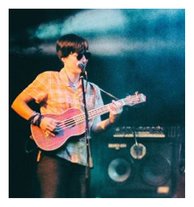 Meike Holzmann is a German born freelance musician living and working Liverpool/UK since graduating with an honours degree in Performing Arts/Music at LIPA (Liverpool Institute for Performing Arts) in 2001, where she focused on songwriting, composition and arrangement with a scholarship from Deutsche Phono Akademie/Keller Verlag.

Since then she has been writing and producing songs and music for theatre, dance and film in UK, Germany, South Africa and France, as well as teaching piano, leading songwriting short courses and facilitating a wide variety of inclusive music workshops in community and educational environments.

End of 2019 Meike succesfully crowdfunded, arranged, performed and produced her first ever studio album 7OVE, a selection of original songs arranged for piano, vocals and viola, featuring her brother Tobias Holzmann on viola. Recorded at Parr Street Studios/Liverpool, engineered by Tony Draper and mastered by Katie Taviani, the seven songs and one instrumental have only been released to crowdfunders, as MP3s and limited collectors vinyl, with original cover art by Gill Smith. Public release and concerts have been postponed due to continuing travel restrictions, until further notice.

Since 2012 she has worked as a composer, sound designer, live musician and musical director with award-winning Tmesis Theatre on Wolf Red, Variations of the Heart, That’s Amore, Happy Hour, Walking Upright, Beyond Belief (2018) and Lone Women: "We Are Becoming Invisible" and "Fallen Star" (2020)

Other highlights of her work include the commission of five movements for string quartet for the interdisciplinary project Heart Variations, performed by the acclaimed Liverpool String Quartet across the North West of England in 2014, and a collaboration with award winning South African choreographer Sbonakaliso Ndaba and Indoni Dance, Arts and Leadership Academy in Cape Town on “Ukwakha” in 2016, supported by Arts Council England/British Council’s AIDF (Artist International Development Fund).

As a musical director, Meike was working with the Choir With No Name Liverpool from 2014 to 2017, with over 30 well-received public performances across the North-West as well as further afield, including sold out shows at MAC /Birmingham, Royal Festival Hall/London and Liverpool St George's hall.

Meike is also a seasoned songwriter and multi-instrumentalist, performing and recording piano, bass, percussions, drums, guitar and vocals with a number of bands in UK and Germany since 1990. Her first original band Rich, Nice $ Fabulous won several newcomer awards in Germany in 1997/98, before she left to England to study music at the “Paul McCartney University”.

As a session musician, she contributed piano, guitar, percussions and backing vocals to the album Fishing in the Pool by Sonnenberg (Probe Records 2007), and in 2009 she formed her second original band the Lonesome Georginas, receiving great audience responses at many Liverpool venues and festivals across England, including Bathing Beauties Festival, Mathew Street Festival, Liverpool Pride, Manchester Pride and GoGo Festival. Meike is also working with Ukulele CLub Liverpool, where she has filled in as a cajonist/bassist at live performances of the UCL House Band, and designed and led a beginners bass course for bass ukulele players.